Parenting gifted children is awesome! No.doubt.about.it. I said ‘awesome’ … not easy. There are days that will overwhelm you and days that will make you cry. When those days come, it is important to remember that there are resources available to you to help make it through the day … and knowing about the ‘Columbus Group’ is one of the best resources I can tell you about.

For decades, most people did not know ‘who’ comprised the Columbus Group. Experts in the field of gifted education were known to question its very existence. This group represented the ‘kinder, gentler side of gifted parenting’. The definition of giftedness (Columbus Group, 1991, in Morelock, 1992)  that was developed in the living room of one of its members decades ago is as follows,

“Giftedness is asynchronous development in which advanced cognitive abilities and heightened intensity combine to create inner experiences and awareness that are qualitatively different from the norm. This  asynchrony increases with higher intellectual capacity. The uniqueness  of the gifted renders them particularly vulnerable and requires modifications in parenting, teaching and counseling in order for them to develop optimally.”

A recent book, Off the Charts, details the history of the Columbus Group and contributing authors are a who’s who of the finest individuals in gifted education and advocacy in the past 40 years. This year, it was honored as a 2013 Legacy Book Award winner from the Texas Association for the Gifted and Talented*.

The term ‘asynchronous development’ as is relates to gifted children was coined by the Columbus Group. In fact, at the time it was initially discussed, a call to the local library was necessary to find the definition of ‘asynchronous’. How fortunate for thousands of gifted children and their parents that someone made that phone call!

Members of the Columbus Group believe in a child-centered approach to gifted children; one in which the whole child’s personal growth and development of ‘the self’ are most important. This is in contrast to those who promote achievement and recognition as the sole goal for which to strive. In a conversation with one of the members of the group, I was told that there was no disagreement with gifted children achieving goals; it just shouldn't be considered the prime focus of their education.

Recent emphasis on talent development did, however, prompt the release of Off the Charts. From Stephanie Tolan’s blog The Deep End:

“So it was that members of the Columbus Group, that has continued
to meet throughout these two decades, decided it was an important
time to put out a book to remind the field of the critical “other side”
(the inside) of giftedness, which is part of the gifted individual’s
experience whether in or out of school, whether achieving in the
eyes of the world at any given moment or not!”

Over the years, Columbus Group members have made incredible contributions to the gifted community from authoring numerous books and papers, presenting at conferences, and establishing schools for the gifted to providing psychological services for gifted children.

In February, 2014, parents as well as educators, program administrators, guidance counselors, psychologists and mentors will have the opportunity to attend a major conference from the authors of Off the Charts, “Asynchronous Development: Understanding the Implications for Gifted Children at School, in the Home and Across the Lifespan”. 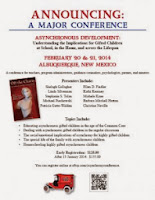 This conference will be an extraordinary experience for parents of gifted children. Having had the opportunity to sit and talk with many of the presenters one-on-one, my life has been enriched beyond measure. It will be held in Albuquerque, New Mexico, on February 21st and 22nd. Reduced registration will be available through January 15, 2014. You can register online here.

If you would like to read more about the Columbus Group, check out these resources:

Off the Charts Asynchrony and the Gifted Child edited by Christine S. Neville, Michael M. Piechowski and Stephanie S. Tolan


“Giftedness: The View from Within” by Martha Morelock

ljconrad
Pittsburgh, PA, United States
I am a gifted education advocate and work with gifted communities worldwide. I hold a B.A. degree in Sociology. On Twitter, I am the moderator of Global #gtchat Powered by the Texas Association for the Gifted and Talented held Thursdays at 8PM EDT. An average of 3,400 tweets reaching 6 million Twitter accounts are devoted to this global discussion every month. I have expanded the reach of #gtchat to include a Facebook Page and Blog. Gifted Parenting Support is read in over 110 countries and its readership includes parents, educators, and academics. I have presented at the 2012 - 2017 TAGT Annual Conferences; 2013, 2015, 2017 PAGE Conferences; a Symposium on Gifted Parenting at the 2013 WCGTC Conference; and 2016, 2017 SENG Conferences. I am a member of TAGT, PAGE, NAGC, SENG, ECHA and WCGTC. In 2013, I was named to NAGC’s Parent Editorial and Content Advisory Board. I may be reached at giftedparenting@gmail.com