Becoming the parent of a gifted child is not unlike getting married. Whereas, you initially think that you are starting a new life together with your spouse, you soon realize that you have actually married an extended family and their entire social network!

Parenting not only involves your child. You must also learn to deal with their peer network – both age-peers and intellectual peers, the parents of their peers, and those who educate. One big happy family … with one exception … the likelihood that they are all emotionally intense and exhibit overexcitabilities.

I’ll admit that even two years ago, I had no idea who Dabrowski was. When I started reading about his theories, I quickly was asking … where have you been all my life? Suddenly a lot of things made sense. I felt like I was an ‘outsider’ who was becoming an ‘insider’ when it came to understanding giftedness. 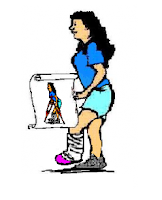 I won’t pretend to fully understand Dabrowski’s theories. A good friend in Austrailia writes a blog called “Sprite’s Site” that does a fantastic job of explaining them. Also, Stephanie Tolan has an article that explains them in layman’s terms. In a nutshell, gifted children and adults tend to take their emotions ‘over the top’.

What does this mean for the parent of a gifted child? Well, for starters, it would be advisable to be able to recognize their traits of gifted individuals which extend way beyond just being smart. And … you need to realize that the rules have changed. Frankly, you should probably throw the rule book out the window! Your child, their friends, their mentors and teachers … probably don’t fit in society’s expectations for run of the mill behaviors.

This isn’t meant to scare you. Think of it as a call to attention. Your life has simply been expanded to include a whole lot of people who experience life somewhat differently than the rest of society. Their intense emotions are the result of an often deeper understanding of the world around them; or at least a different understanding.

My point is that behaviors of gifted children need to be viewed in a new and different light. Although the sum of their parts, they often add up to a somewhat less than predictable result. Add in their asynchronous development and you soon realize that they are far more complex and so much more than simply a talent to be developed. Yes, as a parent or teacher, you do all that you can to assist them in realizing their potential; but that will be meaningless if you don’t understand their intense emotional side.

One last bit of advice … take a look inside and consider that you too may well exhibit intense feelings and overexcitabilities. Self-awareness can go a long way in becoming a much better parent. One day when that precocious little child grows up … they will thank you.
Labels: Dabrowski emotional intensity emotions gifted gifted and talented gifted children intellectual peers overexcitabilities parenting potential talent Tolan

ljconrad
Pittsburgh, PA, United States
I am a gifted education advocate and work with gifted communities worldwide. I hold a B.A. degree in Sociology. On Twitter, I am the moderator of Global #gtchat Powered by the Texas Association for the Gifted and Talented held Thursdays at 8PM EDT. An average of 3,400 tweets reaching 6 million Twitter accounts are devoted to this global discussion every month. I have expanded the reach of #gtchat to include a Facebook Page and Blog. Gifted Parenting Support is read in over 110 countries and its readership includes parents, educators, and academics. I have presented at the 2012 - 2017 TAGT Annual Conferences; 2013, 2015, 2017 PAGE Conferences; a Symposium on Gifted Parenting at the 2013 WCGTC Conference; and 2016, 2017 SENG Conferences. I am a member of TAGT, PAGE, NAGC, SENG, ECHA and WCGTC. In 2013, I was named to NAGC’s Parent Editorial and Content Advisory Board. I may be reached at giftedparenting@gmail.com